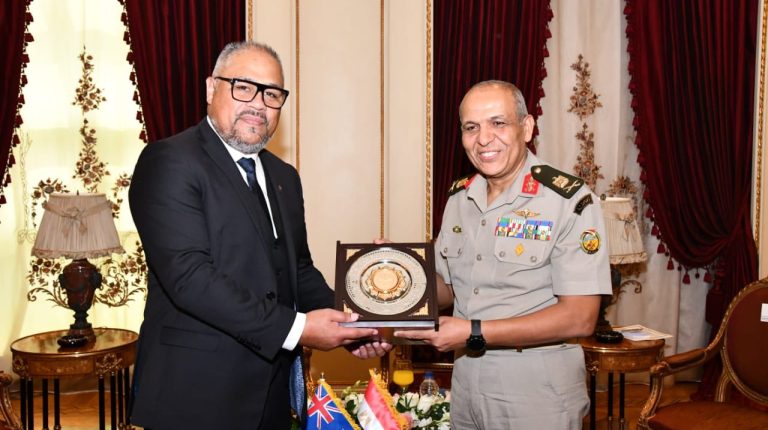 Over the past four decades, both Egypt and New Zealand (NZ) maintained a high level of cooperation on the military file.

NZ has been a significant member of the Multinational Force and Observers in Sinai since 1982.

Both nations are engaged in a lot of work in the multilateral space, peacekeeping, and nuclear disarmament.

Over the past week, NZ Minister of Defence Peeni Henare visited Egypt to reaffirm the important defence relationship between Wellington and Cairo. The visit was part of Henare’s tour of the region, which included Jordan and the UAE.

Daily News Egypt had the opportunity to meet the minister on the side-lines of his visit to Egypt and conducted a short interview to discuss the goals and outcomes of the visit.

Firstly, Let’s talk about the purpose of this visit. What were the expected outcomes? Which of Egypt’s officials have you met?

My visit to Egypt is an important opportunity to connect with Egyptian officials and visit New Zealand Defence Force (NZDF) personnel deployed within the Middle East and North Africa. Also, I just returned from Sinai, where I met with New Zealand Defence Force personnel deployed within the Multinational Force and Observers (MFO).

My programme has included various defence and security related calls in Cairo. It has been a valuable chance to meet with counterparts face to face, exchange perspectives, and obtain a greater understanding of Egypt’s views on regional and global security issues.

In your opinion, what distinguishes the Egyptian-NZ relationship?

The Egyptian-NZ relationship is a long standing and warm partnership built on a foundation of strong mutual interests and commonality. This includes our cooperation in the multilateral space, such as disarmament, promotion of global peace, and security and defence cooperation. We also have a growing trading relationship.

What are NZ’s priorities in terms of its military and defence relations with Egypt? What are the cooperation files that need to be bolstered?

NZ has been a member of the MFO in Sinai since its inception in 1982. The current MFO Force Commander is NZ Major General Evan Williams. We are honoured to have the trust of the Egyptian government to lead the MFO.

NZ has also recently extended the mandate for our Peace Support Operations in the Middle East, including at the MFO, so I have been keen to visit our dedicated NZ Defence Force personnel on the ground who are working towards the promotion of regional security and stability.

Yes, earlier today I opened a women, peace, and security training course at the Cairo International Centre for Conflict Resolution, Peacekeeping, and Peacebuilding (CCCPA) funded by the NZ government. This is the second training of this type that NZ has supported with the CCCPA.

Peacekeeping, conflict resolution, peacebuilding, and understanding the role of gender in conflict are as relevant and important today as they have ever been. The important work done by organisations such as the CCCPA in providing training in these areas is vital.

In your opinion, what are the current global threats and what common security priorities do Egypt and NZ share?

Could you comment on the diplomatic engagements between the two countries and the common foreign policy goals?

Our diplomatic engagements are wide-ranging and multifaceted. Last month, NZ hosted the Egypt-New Zealand Joint Trade Committee between senior Egyptian and NZ officials to progress our trade and technical cooperation.

Later this month, we will commemorate 80 years since the second battle of Al-Alamein near Alexandria. Next month, a delegation of NZ citizens and ministers will travel to Sharm El-Sheikh for Egypt’s hosting of the UN Conference of Parties on Climate Change (COP27).

Could we talk about NZ’s participation in the EDEX 2021? What do you think of this expo? Will you participate in the next edition?

NZ welcomes the opportunity to connect and learn from international partners in the defence and security sphere. All consideration will be given to attending the next EDEX in December 2023.