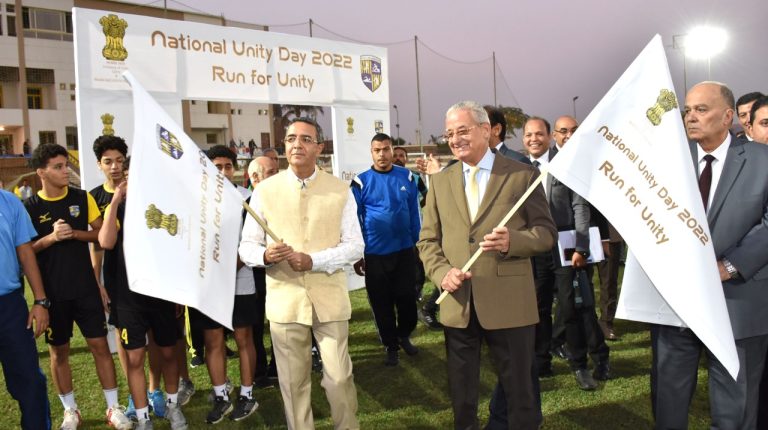 Gupte and Salah delivered opening speeches in the beginning of the event.

Ambassador Gupte spoke about the strong India-Egypt relations and importance of National Unity Day.  He stated that the relations between the two countries are historical and cordial.  There have been several high-level visits in the recent past. The Defence Minister of India visited Egypt last month and met with his Egyptian counterpart and the President of Egypt. Similarly, Foreign Affairs Minister of India S. Jaishnakar visited Egypt just less than two weeks back and met with the President of Egypt, Foreign Minister and other Ministers of Egypt. Ambassador pointed out that this year India-Egypt is celebrating the 75 years of establishment of Diplomatic Relations and Embassies of both the countries are organizing several events in each other’s countries. The Indian ambassador also highlighted that this race provided an unique opportunity for all of us including the participants to come together as a symbol of the Unity between our two friendly countries.

It is pertinent to mention that National Unity Day in India is observed on 31 October every year to mark the birth anniversary of Sardar Vallabhbhai Patel who was the first deputy prime minister and home minister of India. He ensured the peaceful integration of the princely Indian states into the Indian Union and the political unification of India. To honour the leader, the ‘Statue of Unity’ was built in Gujarat, India. It is the world’s tallest statue with a height of 182 metres.

National Unity Day aims to reaffirm the solidarity among the people of India. The day aims to inculcate the emotion of unity in diversity among all Indian citizens. It also reminds citizens to honour the national leader and encourage them to make efforts to maintain peace and harmony in the country.