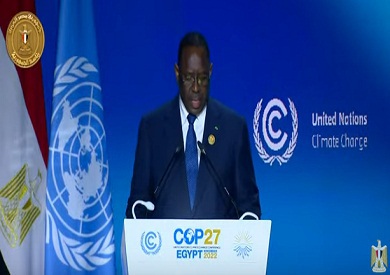 UN Secretary-General Antonio Guterres warned global leaders at COP27’s Implementation Summit, saying “we are on a highway to climate hell with our foot on the accelerator.”

The planet is fast approaching the tipping point that will make “climate chaos” irreversible, he added.

Humanity must “cooperate or perish” in the face of international crises that have battered economies and shaken international relations, he said. “It is either a climate solidarity pact, or a collective suicide pact.”

A short documentary about the impacts of climate change, including recent natural disasters such as drought, forest fires and floods, was screened at the summit.

President of Senegal and Chairman of the African Union Macky Sall warned about the dangers of coexisting with extreme weather phenomena, calling on world leaders to act in order to save the planet and based on the Paris climate agreement.

He also said the African continent has committed to the outcomes of the Paris Climate Summit, and supported the cause with a green belt, in addition to creating agricultural projects and reclaiming more land.

He continued, “African countries have contributed only 4% of carbon emissions, but this does not prevent participation in order to reach the zero point in emissions, move towards a green economy and support the electric energy that many Africans are deprived of.”

He explained that the African continent has a high percentage of tropical forests; that gives the planet a safe climate for biodiversity and the most appropriate way to reduce carbon.

He thanked the supporting European institutions, which gave 80 million euros to African countries; For climate adaptation projects, he continued: “The current summit on the land of Sharm El-Sheikh is an occasion to bring about a historic transformation and reinforce all commitments.”

The opening session of the summit witnessed a speech by President Abdel Fattah Al-Sisi, during which he outlined the features of the roadmap towards a better future for the peoples of the world and humanity, especially with regard to ways and mechanisms for implementing previous slogans and pledges into real, realistic and tangible solutions and commitments to reduce greenhouse gas emissions.

The opening session will also witness the speech of Antonio Guterres, Secretary-General of the United Nations, Sheikh Mohamed bin Zayed, President of the United Arab Emirates, whose country is hosting the upcoming Climate Summit (COP28), the President of Senegal in his capacity as President of the African Union, a Ugandan child climate activist and an inspiring US official in the field of climate change. .

The plenary session of the summit was held on 7-8 November, when it will witness statements by a number of leaders and leaders participating in the meetings.

Six round tables will be held over the two days, and President Sisi will participate in a number of them, with the participation of about 40 heads of state and government from different countries of the world.

President of United Arab Emirates Sheikh Mohammed bin Zayed Al Nahyan, whose country will host the next COP in 2023, said the UAE will continue cooperation with the international community to face climate change and that COP28 would focus on implementing the outcomes of previous sessions.