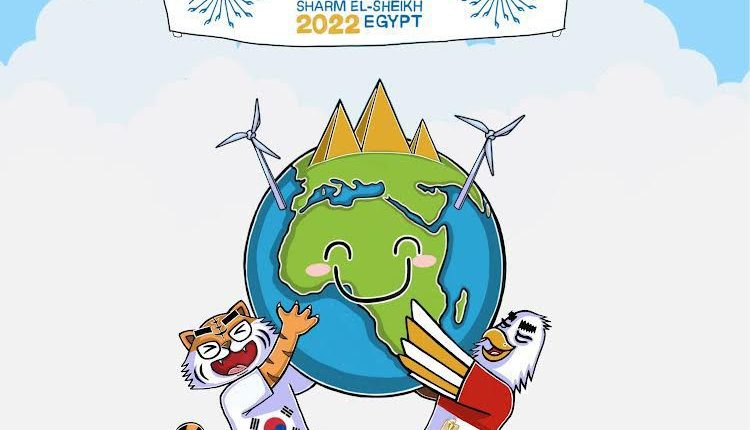 With the opening of this year’s United Nations Climate Change Conference (COP27) in Sharm El-Sheikh, the embassy of South Korea released the mascot illustration of Egypt-Korea COP27 Cooperation using friendly images of two animals which symbolise the two nations.

The illustration features the COP27 logo with an Egyptian eagle and a Korean tiger shouldering the earth. It aims not only to promote the two countries’ unwavering bilateral relations in the field of climate change but also to enhance the awareness of COP27 especially among the young generations in Egypt.

The mascot was designed by the Korean embassy in cooperation with the Egyptian Ministry of Foreign Affairs and Mennatullah Ayman, a renowned Egyptian digital artist and a Korean culture enthusiast, who is currently working in a Korean webtoon company. The Embassy has been utilizing digital art in order to introduce and share Korean culture with Egyptian youth on various public diplomacy occasions.

Korean ambassador Hong Jin-wook mentioned that with COP27 in Egypt, the embassy shall put more effort into expanding the environmental cooperation between the two countries and he wishes that through this illustration many young Egyptians will have more interest not only in climate change issues but also in Korea-Egypt relations.

Ambassador Hong added that the two presidents of Egypt and South Korea had a phone conversation on 20 October to discuss ways to further expand our cooperation in various areas such as COP27, defense industry, infrastructure and people-to-people exchange.

President Yoon Suk-yeol committed to the Korean government’s utmost efforts for the success of COP27 firstly by dispatching his trustworthy high profile senior politician Hon. Na, Kyung-Won to Sharm El-Sheikh to serve as the Special Presidential Envoy for Climate and Environment. She is also currently the Vice-Chairperson of the Presidential Committee on Aging Society and Population Policy and held the previous posts such as the Floor Leader of the ruling Liberty Korea Party, the Chairperson of Foreign Affairs and Unification Committee of the Korean National Assembly and so on.

Mennatullah Ayman said that she is more than happy to be part of this significant project with this historical event and hopes that the two countries’ cooperation in the field of climate change will be more consolidated.