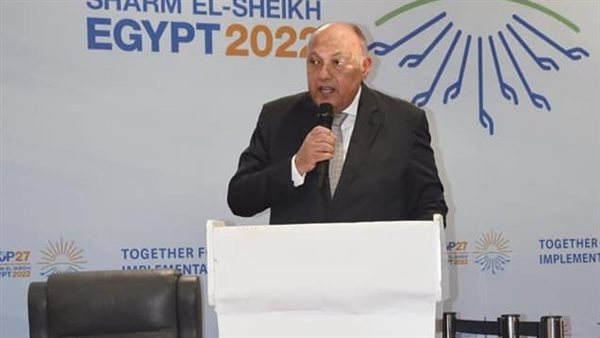 Sameh Shoukry, Minister of Foreign Affairs and President of the 27th Conference of the Parties to the UNFCCC (COP27), participated on Saturday in the launch of the Climate Responses for Sustaining Peace initiative (CRSP).

The initiative was launched under the Egyptian Presidency of COP27, with the support of the Cairo International Center for Conflict Resolution, Peacekeeping and Peacebuilding (CCCPA), in collaboration with the United Nations Development Programme (UNDP) and the African Union (AU).

Ambassador Ahmed Abu Zeid, the spokesperson of the Ministry of Foreign Affairs, said after the launch of the initiative from Sharm El-Sheikh that Shoukry highlighted during the event that the initiative is the first of its kind to deal with the relationship between climate change and peace, reflecting Egypt’s constructive efforts in the field of promoting multilateral action.

He explained that the initiative will be implemented through a number of axes, represented in strengthening the relationship between climate change adaptation and peacebuilding, sustaining peace through climate-resilient food systems, pushing sustainable solutions to the problem of displacement due to climate change, as well as speeding up the mobilization of climate finance to sustain peace.

The CCCPA, which serves as the secretariat for the Aswan Forum for Sustainable Peace and Development, will formulate and follow up on this initiative, which will last for five years, by ensuring the participation, harmony and mutual support between the components of the initiative and the efforts to achieve the goals of the African Agenda for Sustainable Development 2063 and the African Action Plan and Strategy for Climate Change and Development 2022 – 2032, said the Foreign Ministry spokesperson.