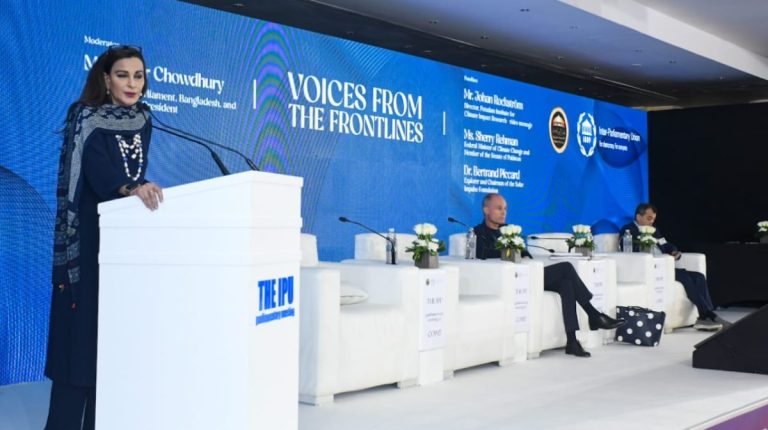 Pakistan’s Federal Minister for Climate Change Senator Sherry Rehman on Sunday said the world at the global forum of UN Climate COP-27 had a spirit of unity, collaboration and cooperation but there was lack of action hindering the way to a climate resilient future.

In her keynote address at the Parliamentary Meeting at the 27th United Nations Climate Change Conference (COP27) under the auspices of Inter-Parliamentary Union (IPU), the Minister said there was a climate clock running at the 27th conference of the parties (COP-27) meeting where there were intense negotiations underway.

Prior to the address of the minister, a two-minute video prepared by the Ministry of Climate Change was played highlighting the Century Breaking Climate Events in Pakistan.

Senator Sherry Rehman said, “Let us pay attention to what we are doing to each other and this planet. And there’s no other option for us and no ‘planet B’ where we can migrate.”

She added that the video clip was a tiny projection of the scale and magnitude of the century breaking climate catastrophes.

“As the UN secretary general said a scale and tragedy we have never seen before.”

Sherry Rehman warned the forum that the global warming was not going to stick to the 1.5 degrees temperature rise rather hurtling towards 3 degrees future.

She said, “I am coming from a country where there has been 3 degrees Celsius rise in overall summer heat which is not habitable for human civilization. I do not think that we need to be sanguine or indifferent to the coming crisis for humanity and the planet we live on.”

Sherry Rehman emphasised that it was not a prophecy of dome and was happening now, adding, “I didn’t show the other video that showed what went on the year. The forest fires, heatwaves and it’s one after the other. There has been a record over 53°C highest temperature where the people have died from such shocks.”

The minister at the forum stated that the people at the most vulnerable risk from such calamity were still hoping that they would all be able to be secured and given predictability, their livelihoods and futures back. “They have the right to live, breath, till the soil, farm their communities and work in the cities that are not burning them out. These are the fundamental rights.”

Senator Sherry Rehman said the COP system was built on common but differentiated responsibilities, adding, “which are not mere word to us. We have come here in the hope that some path forward from intentions to action, from ambitions to process, and delivery on ground will be precipitated here.”

The Minister informed that in Pakistan, the government still had to resettle flood affected people, feed and, clothe them. “All our money has been diverted to cater half of the 33 million population impacted due to unprecedented torrential rain floods during this predating winter.”

She said the Prime Minister and Foreign Minister of Pakistan were at the COP-27 forum pitching for a greater share of this collective responsibility.

Senator Sherry Rehman mentioned that this time it was a monsoon of biblical magnitude with a mix of flooding that hit the country usually originating from the North where the country had the largest number of glaciers outside the polar region. However, these glaciers were melting at a faster pace of three times more than the global average.
She informed that there were glacial lake outburst floods in the north of the country which were managed to save lives due to UN agencies’ assisted long-term interventions for resilient communities and early warning systems in this region.

While quoting a global study, she said the climate impacts had emerged as the biggest health emergency and not the pandemic at the moment. “According to the World Bank, Pakistan has lost some $30 billion in lieu off floods. This is the voice of the frontline bearing the maximum burden of environmental degradation. The race to catch up 3°C will not start in 2050 rather sooner if we don’t do anything.”

Sherry Rehman said the World Bank had estimated that Pakistan would need some $348 billion climate finance to keep it’s head above water till 2050 from whooping climate shocks faced by the country every year.

The minister concluded, “When one ecosystem starts dying and it’s the law of nature that it spreads to others. And what is happening in Pakistan will not stay in Pakistan.”