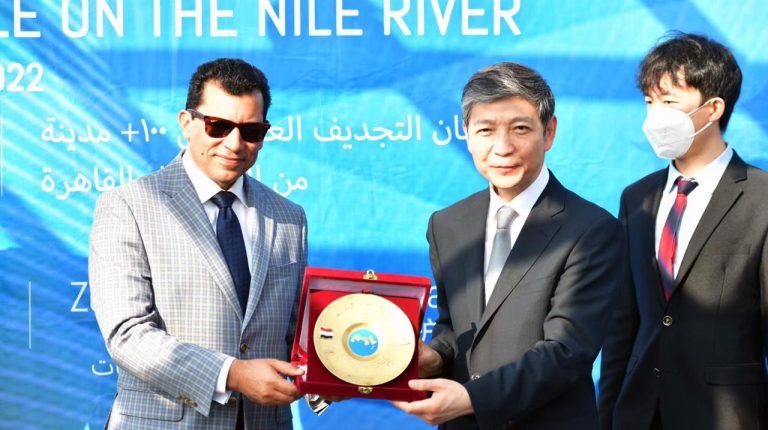 Two rowing events took place on Sunday in Cairo in Egypt and Yangzhou in China, two cities thousands of kilometers apart, in concerted efforts to celebrate the conclusion of a worldwide environmental awareness campaign, “Deep Dive” Global Canal Rowing Action, marked by boat rowing across major canals across the world.

The Action, initiated co-organized by the World Historic and Cultural Canal Cities Cooperation Organization (WCCO), an international organization headquartered in Yangzhou, and the Shenzhen Foundation for International Exchange and Cooperation(SFIEC) of China, is aiming to promote the idea of sports health and environmental protection by holding rowing events in canal cities around the world.

Together with Ministry of Youth and Sports of Egypt, supported by the Egyptian Rowing Federation and Deep Dive Sports Health of China, the ceremonial rowing event in Cairo attracted more than one hundred paddlers and guests all over the world, who raced on around 100 boats against one another on the Nile river, concluded the last leg of the world tour action in 2022.

In an address made at the ceremony, the Chinese ambassador to Egypt Liao Liqiang remarked that the campaign, which covered over 100 cities in five continents, has successfully promoted the sports of rowing and the raised environmental awareness under the slogan of “zero carbon, zero waste and clean water”.

“Some of the participants will fly to Sharm El Sheik to attend the ongoing Climate Change conference COP27,” Liao continued, “the Chinese government will actively participate in the global governance of climate change with an open mind and an enterprising attitude, and is willing to work with all parties to jointly promote the success of COP27 on the principles of openness and transparency, broad participation, agreement through consultation, and parties-driven process, and make its due contribution to build a fair and rational global climate governance system for win-win results.”

Early on the same day, another similar event was held in Yangzhou, a famous historic city along the Chinese Grand Canal. Wang Jinjian, the city mayor and WCCO president, said that Yangzhou will continue to encourage the international cooperation of heritage and environment protection, cultural and tourism development.

More rowing events were also held at 18 other cities across the world alternately, which amounts to a global rowing relay, and it is a clear sign that action’s has won wide endorsement, according to Feng Nan, director of Deep Dive. A new plan of the campaign for the next year is in the pipeline, he added.