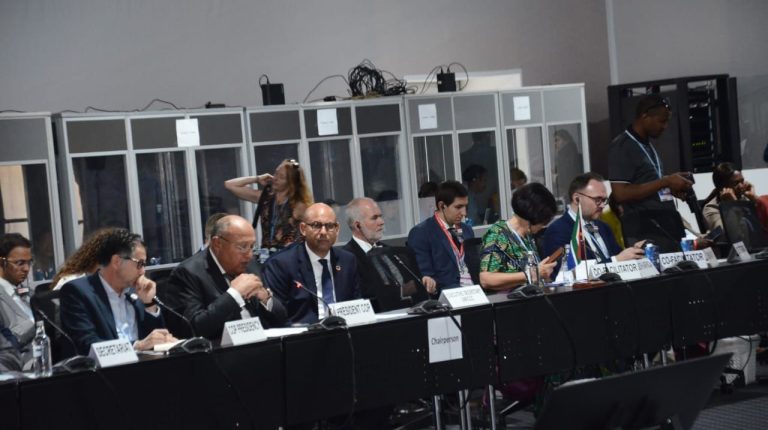 Minister of Foreign Affairs and President of COP27, Sameh Shoukry, participated on Monday in the ministerial roundtable on mitigating the effects of climate change before 2030, with the participation of Simon Steel, Executive Secretary of the UN Framework Convention on Climate Change (UNFCCC), and delegations of UNFCCC member states.

Minister Shoukry expressed Egypt’s appreciation for hosting the ministerial roundtable during COP27, which is considered the first on this topic, as stipulated in the Glasgow Climate Charter issued by the 26th Climate Conference last year.

In this regard, Shoukry highlighted the importance of mitigating the effects of climate change, in light of the international scientific reports indicating the need to move quickly in this regard to maintain global temperatures at safe rates.

He also referred to the challenges facing mitigation efforts in light of the current geopolitical situation, stressing the need to act immediately to overcome these obstacles in light of the continued negative repercussions of climate change regardless of the international situation.

The Foreign Minister also highlighted the opportunity provided by this round table to advance efforts to mitigate the effects of climate change by sending a message that emphasizes the political will of all parties to commit to mitigation efforts.

He stressed the Egyptian presidency’s keenness to achieve satisfactory results for all, especially on mitigation and the various aspects of the international climate in general.

For his part, Simon Steel, the executive secretary of the Framework Convention, stressed the need to be wary of continuing to increase the level of emissions, as is currently the case.

In this regard, he noted the content of the IPCC report on greenhouse gas emissions, which highlights the importance of sending a message through COP27 that reflects the political will of Parties to strengthen their efforts to mitigate the effects of climate change by increasing their efforts to reduce emissions and providing clear guarantees in this regard, in a manner that contributes to the fulfillment of the provisions of the Paris Agreement.

The meeting included a presentation by the Intergovernmental Panel on Climate Change (IPCC) on the latest scientific research on the magnitude of emissions around the world and their impacts on mitigation efforts.

He noted that the Egyptian presidency of the conference is keen to hold consultations with all parties, as well as hold additional ministerial consultations in order to push the negotiations forward.

This came during his chairmanship of a special briefing for the plenary session of the Conference, during which the progress of the negotiating process on the various items on the agenda of COP27 was reviewed from the beginning of the negotiations to today.

Ambassador Ahmed Abu Zeid, the spokesperson of the foreign ministry, noted that the President of the Conference expressed appreciation to all delegations for their efforts to reach the desired consensus on the various items of the agenda of the Conference.

The Minister also commended the role of representatives of civil society organizations in encouraging delegations to COP27 to raise the ceiling of their aspirations with regard to the work of the international climate in all its aspects.

Abu Zeid explained that the minister reviewed the vision of the Egyptian presidency of the conference on the tracks of climate negotiations in the coming days, in light of its consultations with various parties and groups.

He noted the keenness of the president of the conference to follow up the progress of the negotiation process in the coming days, and that the Egyptian presidency of the conference is open to all delegations in order to achieve the common goal of the Sharm El-Sheikh conference with comprehensive and balanced results that enhance the international climate action.