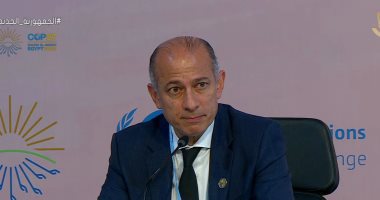 Sharm El-Sheikh – Wael Abul-Magd, Special Representative of the COP 27 President, said that negotiations on climate funding are still ongoing, and we continue to press for compensation in the “file of losses and damages” for the affected countries, including Egypt.

During a press conference at COP27, he added that the second week will witness more push to fulfill the commitments of the Paris Agreement, and come up with an implementation mechanism for the Climate Conference in Glasgow, to implement it during 2024.

He pointed out that the negotiating process, which was held over the previous days in the conference, witnessed good progress in terms of multilateral negotiation tracks, and the pace of that progress increased during the second week until we reach tangible outcomes in the negotiating framework.

He added that the climate conferences every year experience difficulty in adopting a specific agenda, especially when some countries request the addition of new items, noting that this year 8 new items were added, so the negotiation process prior to the opening was very important and was a more sensitive stage that took great effort until The agenda is approved without problems.

Abul-Magd explained that Egypt and the United States organized the “Adaptation in Africa” initiative to provide an integrated package of projects, support, financing, training and rehabilitation for Africa, and we were keen on making Africa a priority by offering a serious initiative that includes an integrated package of projects, procedures, financial support, training programs, and a center A training that will be established in Egypt to train African experts and scientists involved in adaptation and this is an embodiment of the conference’s motto “Implementing Together”.

He pointed out that the Secretary-General of the United Nations put forward an initiative to cover the whole world with early warning management systems over a period of 5 years, and the United States supported that initiative, especially with regard to Africa, because about 80% of the African continent is not covered by any early warning system against climate events.