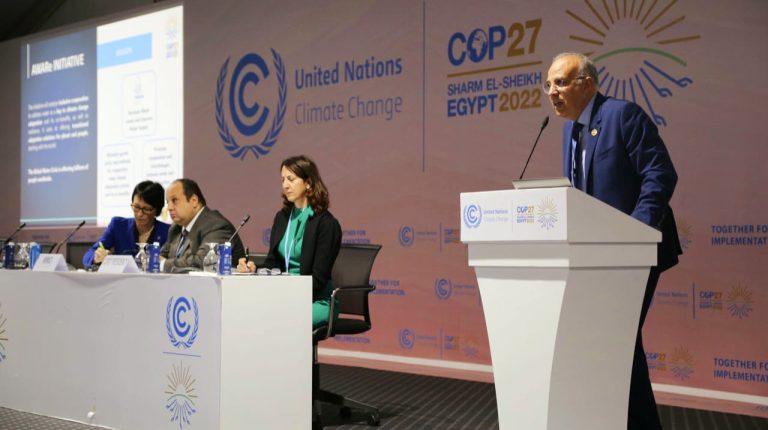 Egypt’s Minister of Water Resources and Irrigation Hani Sweilam announced on Monday, the launch of the Action on Water Adaptation and Resilience (AWARE) initiative, within activities of the Water Day during COP27.

Sweilam indicated that Egypt has made great efforts to put water at the centre of global climate action through a number of measures and events, most notably Egypt’s launch of an international initiative to adapt the water sector during the Water Day.

He stressed the importance of everyone’s support for this important initiative, which is concerned with water and climate issues at the global level, noting that COP27 is the first climate conference to dedicate an entire day to water systems.

The minister reviewed the most prominent challenges facing the African continent resulting from climate change, noting that the temperature in Africa has increased by 0.90 degrees during the past 30 years, and temperatures are still expected to increase during the coming decades, as more than half of the African continent is under severe drought, and therefore Climate change clearly negatively affects water security in Africa and thus negatively affects food security on the continent, in addition to the sea level rise at a rate of 3 mm / year, which threatens many coastal areas in Africa.

He explained further that the initiative for adaptation in the water sector was prepared in partnership with the World Meteorological Organization (WMO) and other international partners, relying on the outcomes of several international meetings extended over the past months, held under the umbrella of a number of international coalitions.

Moreover, Sweilam reviewed the six axes included in the initiative which include taking into account the lack of impact of economic growth on the use and deterioration of freshwater, calculating green water when developing national plans for water use and strategies for adaptation, mitigation and protection of freshwater ecosystems, cooperation across transboundary river basins with regard to adapting to climate change, promote sustainable, low-emission, low-cost management of drinking water and wastewater, Establish early warning systems for extreme weather events, and link national water policies to climate action to reflect the long-term impacts of climate change on water resources and demand.