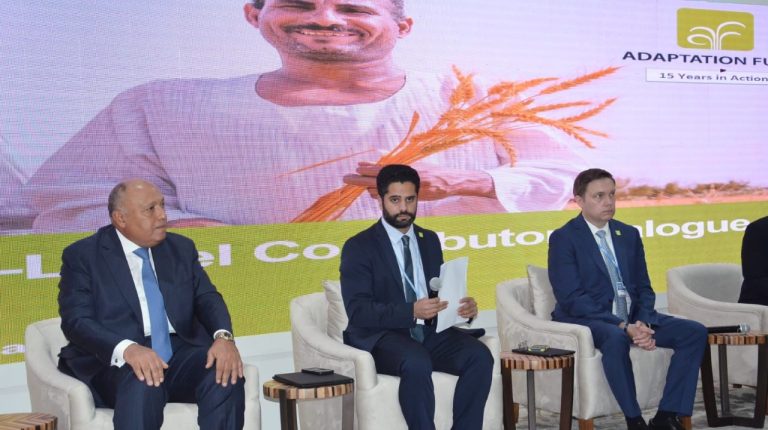 Egypt’s Minister of Foreign Affairs Sameh Shoukry participated on Tuesday in an event bringing together the parties contributing to the Climate Change Adaptation Fund (CCAF) in the presence of US Presidential Special Envoy for Climate Change John Kerry among other international representatives.

This came during the activities of the UN Conference of Parties on Climate Change (COP27), which is being held in Sharm El-Sheikh till 18 November.

Ahmed Abu Zeid — Spokesperson for the Ministry of Foreign Affairs — said that Shoukry noted during the event the fund’s ability to mobilise the necessary funding to promote climate change adaptation measures in developing countries.

He also praised the positive role of the fund in providing climate finance, noting how it funded two adaptation projects in Egypt worth more than $10m, affirming the country’s commitment to support efforts to further mobilise resources to the CCAF.

The minister also expressed appreciation to all donors supporting the CCAF, stressing that their material contributions to the enhancement of the fund’s resources help implement many adaptation projects on the ground and protect communities most vulnerable to the impacts of climate change.

The CCAF was established to finance climate change adaptation projects in developing countries that are members of the Kyoto Protocol that are most vulnerable to the effects of climate change.

Since 2010, the fund has mobilised more than $850m for more than 120 projects, benefiting about 28 million members of communities most vulnerable to the effects of climate change.

Earlier on Tuesday, the FM participated in the launch of Energy Day within the activities of the COP27 in the presence of several local and international energy officials.

During the event, Shoukry said that the energy sector is now one of the most carbon-emitting economic sectors, highlighting the need to invest in new, clean, low-cost, and sustainable sources of energy in order to strengthen efforts to mitigate the effects of climate change and shift towards a green economy.

He added that the shift towards a green economy was no longer just a necessity to confront climate change, but an economic option that had many benefits in view of the repercussions of the current geopolitical situation and the resulting global energy crisis.

Shoukry also noted that the transition towards clean energy sources was the top topic of discussion at the COP to implement the commitments made on 7 and 8 November, which generated significant political momentum that needs to be built upon and exploited.

Furthermore, he stressed the need for a just transition towards clean energy sources, taking into account the economic and social conditions in developing countries, including African countries, which house millions of people that do not have access to clean and low-cost energy despite the huge potential of the continent to generate renewable energy.

Shoukry also called for the use of Energy Day to arrive at specific steps to be taken to achieve a rapid and fair transition towards environmentally friendly energy sources in a manner that preserves the objectives of the Paris Climate Change Agreement and achieves economic prosperity and sustainable development.