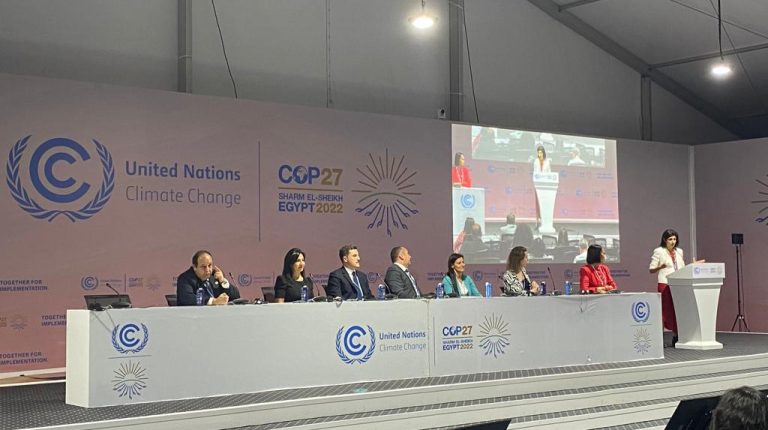 “There is around $379trn in global funds available per estimates measured by the OECD Global Outlook. One percent of this amount is enough to address the SDG Gap, inclusive of adaptation finance,” said CIB’s Chief Sustainability Officer Dalia Abdel Kader. “According to the World Bank, every dollar invested in adaptation yields seven dollars in overall benefits. The challenge now lies in innovating new business models and financial structures that address risk-adjusted returns and monetize social and environmental gains and losses.”

Panel discussions highlighted that private financing contributes a mere 1.6% to adaptation finance. This absence is mainly attributed to the perception that adaptation projects are risky and not profitable, limiting their resourcing to public funding and concessional loans. Moreover, the lack of bankable and investable pipeline projects has mostly derailed adaptation finance and critically exposed developing countries to climate calamities, including starvation and drought. Promising developments are underway as several African countries launched National Adaptation Plans (NAPs) and Nationally Determined Contributions (NDCs). This foundational step was vital for expressing demand to various public and private stakeholders, and yet food and water projects still require setups that attract private investors, thus introducing a new role for banks.

Rania Al-Mashat, Minister of International Cooperation, said: “Financial institutions have a responsibility to develop proactive roles that further Egypt’s climate agenda. Through the NWFE programme, a pipeline of projects will be made available to accelerate Egypt’s climate goals, and the launch of the “Brain Trust” programme will help prove the invest-ability of adaptation in agricultural and water projects.”

“While COP27 aspires to reach an agreement on climate issues and mobilize pledged funds to developing countries, Africa – wrestling with starvation and drought – can’t afford to be in the waiting,” exclaimed Al-Mashat. “From climate to geopolitical crises, Africa remains the most vulnerable continent, with millions of inhabitants either experiencing or on the brink of starvation. The continent is unduly paying the price for a series of crises not of its making, yet the solution will be Africa’s making.”

“Brain Trust” serves Egypt’s evolving climate goals and newly issued pipeline projects. An Africa-led initiative, it is a step towards mobilizing the “Billions to Trillions” framework and addressing the misalignment between global private funds and adaptation projects in sustainable and sufficient food systems in Africa. The initiative mobilizes African financial institutions to address the invest-ability of food projects and ensure that a solid risk/return formula is in place to address the concerns of global investors. It aims to migrate financing from the domain of public finance and concessional loans to private finance, and from seeking billions of dollars of broken pledges to trillions of sustainable investments. The initiative also includes a project-specific “Adaptation Finance Governance Mechanism” that anchors the relationship between finance and science and comprises a checklist of must-dos to ensure lucrative risk-adjusted returns from innovation in project design, climate finance instruments, data disclosure, and reporting.