Egypt We call on all parties to work to reach a consensus and seek to build capacity: COP27 President
Pin +1 WhatsApp Tweet Share Share Jobzella Email 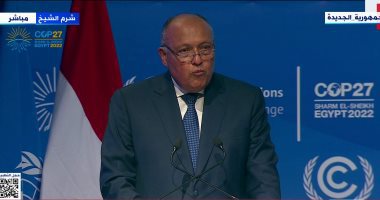 Egypt’s Minister of Foreign Affairs Sameh Shoukry — who is also the Chairperson of the UN Conference of Parties on Climate Change (COP27) — called on nearly 200 countries gathered in Egypt to “rise to the occasion.”

Speaking a day after the conference was supposed to end, Shoukry said he knew there was a lot of “resentment” among all sides but called on countries to show determination to reach a consensus.

He added that the “vast majority “of countries consider the draft resolutions submitted by the presidency of the climate conference to be “balanced.”

“The vast majority of the parties informed me that they consider the text balanced and may lead to a possible breakthrough in reaching a consensus,” Shoukry said after a night of intensive negotiations following the extension of the conference in Sharm El-Sheikh.

He stressed that positions cannot be expressed through a contradiction in ideas, but it must be recognised that there may be a position that contradicts the positions of others that prevents reaching a consensus.

He added that the issue is up to the various parties to reach a consensus and show the necessary flexibility to address the challenges of climate change, which affects millions who suffer destruction due to floods and wildfires.

Shoukry also pointed out that there are many solutions and that it is necessary to provide the foundations on which to build.

The draft of a final statement of the summit issued by the Egyptian presidency revealed a sharp polarisation between the countries of the global North and South and reflected the divergent positions between visions and aspirations on the main issues in the negotiations.

The affected southern countries are demanding a dedicated fund to finance losses and damages, which is the main issue on the agenda of the negotiations, as well as funding climate adaptation plans and working to reduce emissions.

For their part, the US and the EU have expressed reservations regarding the establishment of a separate financing mechanism for losses and damages in the presence of existing financing institutions that can do this, and some countries have expressed their readiness for individual financing away from the existence of a financing entity in the agreement.

The conference originally began with an optimistic impetus with the announcement of the Egyptian presidency of the summit in the opening speech, the inclusion of loss and damage financing on the agenda in a precedent that is the first of its kind in the history of climate summit.

However, major industrialised countries have been stalling on a decision to launch a fund financed by them to compensate developing and poor countries affected by climate change despite not contributing significantly to greenhouse gas emissions.