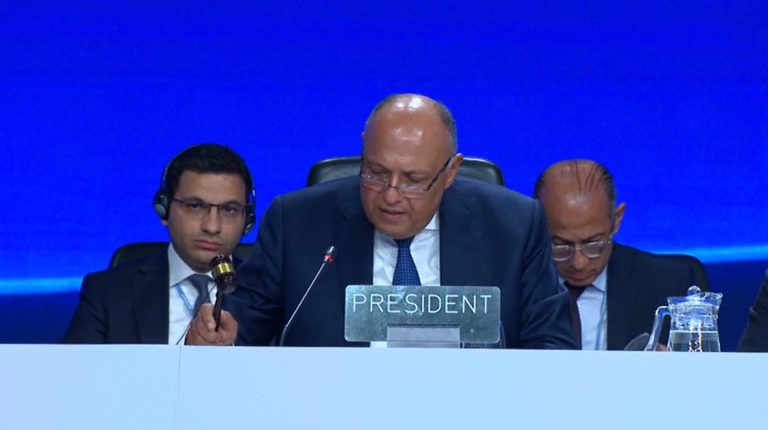 After two weeks of extensive talks in Sharm El-Sheikh, Egypt, the UN Conference of Parties on Climate Change (COP27) came to a historic conclusion on Sunday with a decision to compensate for the losses and damages for vulnerable nations who have been severely affected by climate disasters.

“I now invite the COP to adopt the draft decision on funding arrangements for loss and damage. I hear no objections. It is so decided,” COP27 President Sameh Shoukry said during the plenary session late on Saturday.

In spite of a challenging geopolitical environment that led to extending the negotiations for one day to be concluded on Saturday evening instead of Friday 18 November, the parties delivered a package of resolutions that reaffirmed their commitment to keeping global temperature increases to 1.5°C above pre-industrial levels.

The package also boosted the financial, technological, and capacity-building assistance that developing nations need to reduce their emissions of greenhouse gases and adapt to the inevitable effects of climate change.

Simon Stiell — UN Climate Change Executive Secretary — described the outcome as a step forward saying: “We have determined a way forward on a decades-long conversation on funding for losses and damages, deliberating over how we address the impacts on communities whose lives and livelihoods have been ruined by the very worst impacts of climate change.”

A significant step forward was the establishment of a dedicated Loss and Damage Fund, which was added to the formal agenda.

Additionally, governments concurred to form a “transitional committee” to advise on how to operationalise the new financial arrangements and the fund at COP28 the following year. The transitional committee’s inaugural meeting is expected to be held before the end of March 2023.

The parties also agreed on the institutional framework for the Santiago Network for Loss and Damage’s Operationalisation, which will help spur technical aid to developing nations that are particularly susceptible to the negative consequences of climate change.

Moreover, significant adaptation progress was made at the COP27. Additional contributions totalling more than $230m were made to the Adaptation Fund. Through practical adaptation strategies, these commitments will assist many more vulnerable communities in adapting to climate change.

“The work we’ve managed to do here in the past two weeks, and the results we have jointly achieved, are a testament to our collective will as a community of nations to voice a clear message that rings loudly today, here in this room and around the world, that multilateral diplomacy still works… Despite the difficulties and challenges of our times, the difference in views, level of ambition, or apprehension, we remain committed,” Shoukry concluded.