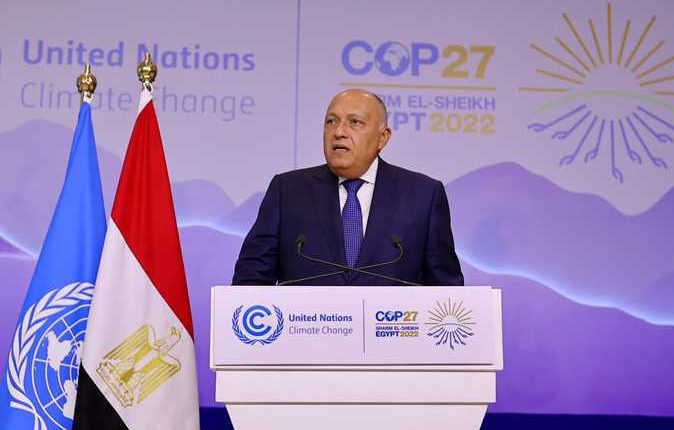 Egypt’s Minister of Foreign Affairs Sameh Shoukry — who is also President of the 27th UN Conference of Parties on Climate Change (COP27) — confirmed that the climate conference ended with an agreement on the financing of developing countries to counteract the adverse consequences of climate change.

In a press conference held on Sunday following the conclusion of the COP27, Shoukry said 112 heads of government and state participated in the two-week conference, which included participants in “high-level segment and round-table” events.

He added that the COP27 is an executive conference that was not limited to traditional decisions, but rather sought from the first moment and since its preparation phase for the transition from the British presidency to the Egyptian presidency to devote the importance of implementation.

The COP27 president also noted that an agreement had been reached on the establishment of the Loss and Damage Fund to aid the countries of the world — especially developing countries — to the negative repercussions of climate change.

Shoukry stressed that this is a historic achievement after 27 years of addressing and demanding from African countries that this be achieved, highlighting the success of the conference and Egypt, which chaired and supported this conference.

“The work done in two weeks at the climate conference and the results we have reached are a testimony to a collective will… We are a family of nations, and we have sent a clear message around the world that we are here in the hall despite difficulties and differing visions and ambition,” he said.

“We are committed to addressing climate change through multilateral diplomacy.”

He also pointed out that substantive efforts were exerted to include all parties, from states to NGO and global institutions to join hands and work on mitigation and adaptation measures and keep the rate of global temperature increase below the 1.5°C threshold.

Finally, he expressed the hope that the decisions and conclusions recommended by the COP27 would continue to be considered and thanked all delegations and participants for working together to reach this final outcome outcome.