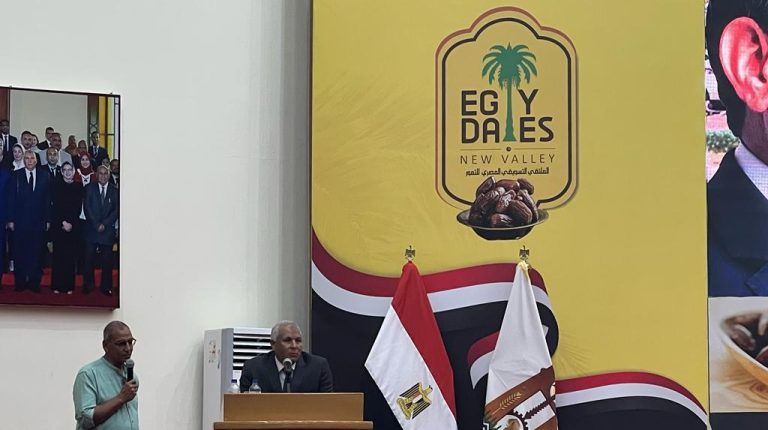 The conference was attended by Deputy Minister of Tourism and Antiquities for Tourism Affairs Ghada Shalaby; Essam Al-Qadi, Vice chairperson of Safari Egypt; Amr Sedky, former chairperson of the tourism committee in the House of Representatives; Hany Mostafa, Vice President of the Universal Health Insurance Authority; several representatives from the Ministry of Tourism, the Egyptian Tourism Promotion Board (ETPB), and the governorate; several presidents of Egyptian universities; and businessmen.

Governor El-Zamalout began his speech by welcoming the attendees and the Spanish doctors delegation then he gave general information about the New Valley Governorate,he revealed that the new Valley represents 44% of the territory of Egypt, and 67% of the Western desert.  He revealed that the total population in the governorate does not exceed 260,000, in which the share of the person of land is at 2-3 sqkm.

He pointed to the declaration of the late leader Gamal Abdel Nasser creation of the New Valley in 1959 and the launch of the construction brigades of the armed forces.

Governor El-Zamalot mentioned that due to the war circumstances that Egypt passed by in 1967, the development in the New Valley was stopped but it returned strongly in 2016 when President El-Sisi announced the project One Million and A Half Acres’ Project,  mentioning that the share of the New Valley was half a million acres. He presented the logo of the governorate and explained its reflection or meaning.

He said that aiming to enhance and develop the tourism and the investment in New Valley, the state has spent more than EGP 60bn in the services sector in the governorate  during the period from 2014 to 2022, in which EGP 49bn were spent in roads, EGP 2bn in electricity, EGP 1bn in Supply, EGP 2bn in health, EGP 1bn in housing and urban communities, EGP1bn in educational buildings, EGP 1bn in drinking Water and sanitation, EGP 1bn in youth employment project, and EGP 1bn in investment plan.

“Electricity is available for all current and future investments up to 2030, and the governorate is one of the best solar production areas in Africa for sunshine throughout the year,” he revealed.

The governor said that by 2030, all governmental departments, schools and places of worship in the New Valley will be powered by solar energy.

He revealed that the governorate in cooperation with the Ministry of Tourism is working to make all the eco-hotels to be powered by renewable energy.

Notably, the governorate is filled with a diversity of hotels and eco-resorts, that is visited by visitors from different countries of the world, the most famous of whom was the British royal family, and the world actor Robert de Nero during his only visit to Egypt.

Governor El-Zamalout mentioned that New Valley is considered the first city in the desert to have natural gas.

“In COP27, we presented and explained to the Africana and Asian countries, our experience in delivering the natural gas to the desert,” the governor said.

He mentioned that the Egyptian city of Kharga, in the New Valley Governorate, was named the Arab Environmental Capital for 2022,

Governor El-Zamalout said that one of the results of COP27, that the governorate will establish a factory in order to make the Kharga city a plastic free city, in order to be environmentally friendly.

With a specific focus on the tourism potentials, the governor said that the city witnesses a lot of types of tourism ranging from sports tourism, conferences, mediation tourism and therapeutic tourism. He mentioned that Safari and international rallies are also active in the vast deserts of the valley. In addition to the camping tourism in the White Desert which is one of the most famous deserts in the world. He also talked about the archeological places in the governorate including the Hibis temple.

The city has many therapeutic properties for humans, from sand burial, to silt treatment, to sulphur wells to mud therapy. In addition the country is rich in a wonderful range of wild plants and herbs that can be used in treating many diseases.