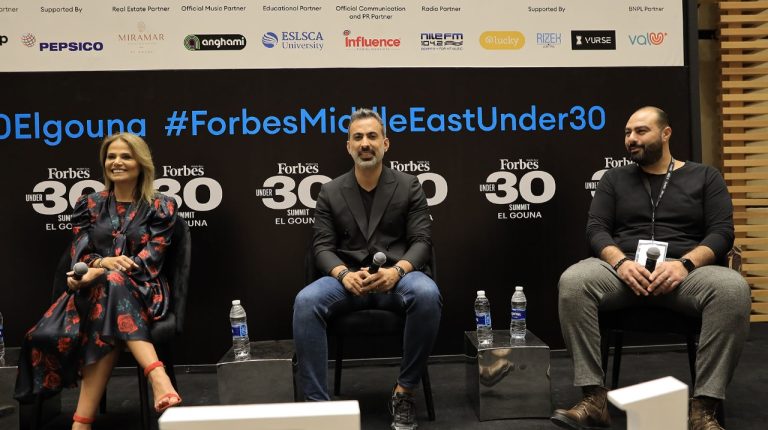 Founder and Managing Director of Grass Roots LTD and Phlog, Khaled Taher, has expected that the number of content creators will exceed one billion by 2027.

It comes during the “New Media and Latest Forms of Entertainment” session on the third day of the first-ever Middle East 30 Under 30 Summit in El Gouna, Egypt on Saturday.

Al-Murr talked about her TV programme “All Access”, and how she was able to combine the requirements of television viewers and users of social networking sites, and says in this: “In our program, we do not seek to present topics that are of interest to current generations, but we always try to publish them on our platforms on social networking sites in different formats suitable for each platform.” Al-Murr added: “As a mother of two children, this always pushes me to present positive and useful topics to my fans, and I do not care about the number of my followers as much as I am interested in good and real interaction.”

Taher said: “The nature of advertisements on social networking sites is different. The advertising message must be delivered to the viewer in less than 30 seconds, and if the advertisement is prolonged, the viewer will become bored and overtake it immediately.”

In response to the question of one of the attendees: “How can we make use of the media materials that young people film on their phones and do not see the light in the required way?” Taher said: “I advise young people to go to various websites that help sell media products such as photos, videos, and others.”

For his part, TV presenter Elie Nakhle said: “I entered the world of social media late, but in my interviews I am able to combine the professionalism of the classic television industry with details that interest young people on social media.”

He added: “As media professionals who are accustomed to traditional media, we have become what is known as the “Old New” school, which is to enjoy the authentic media experiences that we have gained over the years, and to keep pace with the interests of the audience of social media platforms, because it is inevitable to keep pace with the requirements of the current time.”

Forbes Middle East, in partnership with El Gouna, one of the cities of Orascom Development Holding in Red Sea governorate, hosted the conference from 24 to 26 November, where a series of events were organized to exchange knowledge and experiences. A “Speed-Pitch” competition was organized, as well as a music festival, with the winners from Forbes Middle East’s “30 Under 30” list for 2022 honoured in the closing ceremony.