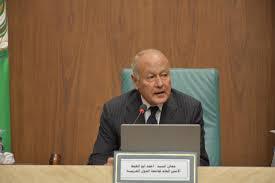 He stressed that foremost among these rights is his right to self-determination, an end to the occupation, and the establishment of an independent and sovereign state on the lines of June 4, 1967 with East Jerusalem as its capital.

During an event held at the headquarters of the Arab League on Tuesday, Aboul Gheit added that this occasion will be held this year in light of a complete blockage on the horizon to achieve a just, lasting and comprehensive peace based on the vision of the two-state solution.

He pointed out that this same vision is threatened by the consolidation of the Israeli occupation in the occupied Palestinian territories, its racist policies and practices, and the escalation of its aggression against the Palestinian people, in flagrant violation of the principles of human rights, international law and international legitimacy resolutions.

Aboul Gheit called on the international community to shoulder its responsibilities by providing international protection to the Palestinian people and deterring the expansionist colonial occupation regime, as it cannot be allowed to consistently escape Israel’s legal responsibilities and accountability for crimes it has committed and for crimes it continues to commit daily against the Palestinian people.

He stressed the need to support all Palestinian and Arab diplomatic efforts to enhance the status of the State of Palestine on the international scene, foremost among them the attainment of full membership in the United Nations (UN)to become an active member of the international community.

He praised the steadfastness of the Palestinians, describing it as legendary, as well as the international positions supporting him in his struggle and national struggle for freedom and independence, which continue to have a fundamental and important impact, giving the Palestinians hope that the justice of their cause will remain stronger than the oppression and terrorism of the occupation.

The Secretary-General welcomed the signing of the “Algiers Document” by the Palestinian factions, commending the role played by Algeria in reaching this achievement, which is considered an important step towards Palestinian reconciliation.

He said that this step adds to all Arab efforts to end the Palestinian division, especially on the part of Egypt, which has made sincere and continuous efforts to contain Palestinian differences and pave the way for reconciliation.