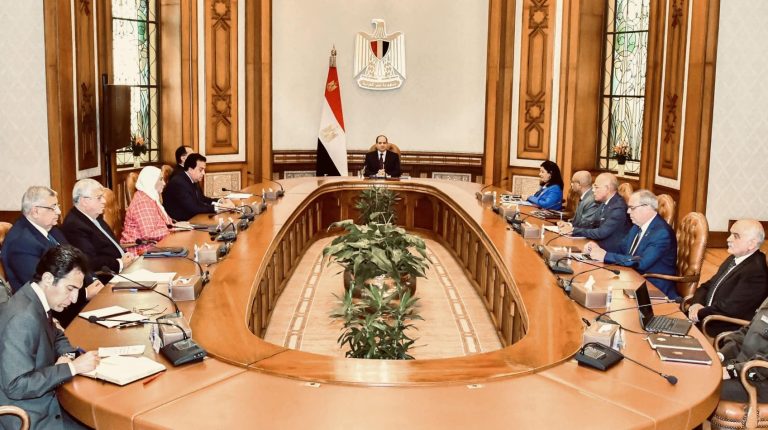 Egypt’s President Abdel Fattah Al-Sisi received on Wednesday, Chapal Khasnabis, Head of the Assistive Technologies and Medical Devices Unit at the World Health Organization (WHO), and Claude Tardif, President of the International Society for Prosthetics and Orthotics (ISPO), to follow up on the localization of the industry of prostheses and prosthetic devices.

The meeting was attended by Naima Al-Qaseer, representative of the WHO in Egypt, in the presence of Mostafa Madbouly, Prime Minister, Khaled Abdel Ghaffar, Minister of Health and Population, Nevine Al-Qabbaj, Minister of Social Solidarity, Mohamed Ayman Ashour, Minister of Higher Education and Scientific Research.

Mohamed Awad Taj El-Din, Advisor to the President of the Republic for Health and Prevention Affairs, Major General Al-Sayed Al-Ghali, Chairman of the Board of Directors of the Martyrs Honoring Fund, Major General Doctor Eid Mahmoud, Advisor to the Minister of Defense for Medical Education and Prosthetic Devices, and Major General Muhammad Ali, Deputy Director of the Technical Research and Development Department of the Armed Forces, attended the meeting also.

During the meeting, the president directed to expedite the steps of acquiring the manufacturing capacity of prosthetic limbs and devices according to internationally approved standards, regardless of the financial costs and economic challenges, and by establishing an integrated industrial complex to provide that noble service to every person in need, from a human, moral and religious perspective.

He also stressed the importance of taking into account the possibility of developing that industrial complex to become a regional centre to present that humanitarian message to all countries of the region from the perspective of respecting and preserving human rights against the background of violence and terrorism that the region suffers from.

The official spokesman added that the meeting witnessed a review of the state’s efforts through all the various concerned agencies to establish a comprehensive industrial complex for prosthetic limbs and prosthetic devices in Egypt, in accordance with the latest international technological and medical standards and in cooperation with global expertise including the WHO, in order to benefit from the capabilities of the organization in training and qualifying the manpower participating in the project in preparation for obtaining international accreditation.

In this context, the details of the current visit of the technical delegation from the WHO and the ISPO to Egypt were presented, with the aim of activating cooperation in this regard, as well as hospitals and health care agencies, especially the health care complex in Ismailia, which was developed within the comprehensive health insurance system that is being circulated to all governorates of the republic, with the aim of reaching the desired level in terms of medical insurance for people with mobility disabilities.

The President was also briefed on the technical delegation’s field visit to the Rehabilitation Center in Agouza of the Armed Forces, which provides a distinguished rehabilitation service for people with mobility disabilities, as well as the center’s prosthetic limbs factory, which collects and aligns prosthetic limbs according to the latest international systems and in cooperation with major international specialized companies. Including the training of human cadres.