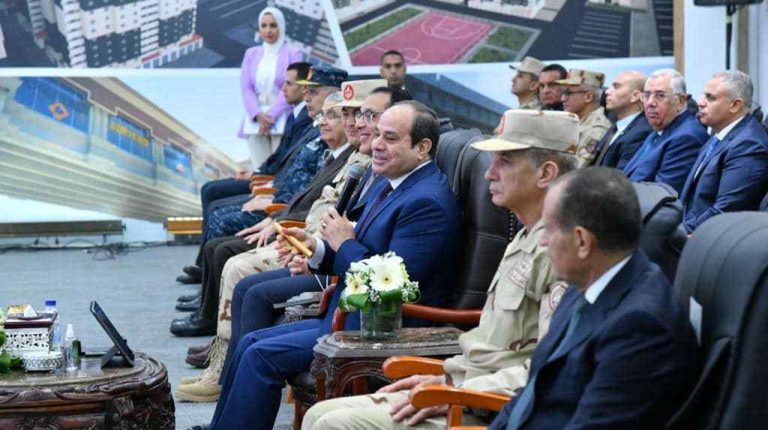 Egypt’s President Abdel Fattah Al- Sisi affirmed that the state takes into account the preservation of national wealth when implementing any new projects, whether re- lated to roads or otherwise.

This came on Monday during Al-Sisi’s inauguration of the reconstructed Abu Zekrya Axis in Alexandria, which extends 35 km from its intersection with the Cairo- Alexandria Desert Road to Sidi Kerir Road/Burj Al- Arab

Airport, with nine traffic lanes in each direction.

“ While establishing the con- struction axis in Alexandria, we avoided removing a large number of residential buildings that reach a height of more than 10 floors in order to preserve the property of citizens, and the solution was to fill in part of the sea.”

He added that the state plans to meet the requirements of citizens according to the rates of population increase and is working to change the lives of citizens for the better in unplanned areas.

“It is not the responsibility of the Ministry of Social Solidarity and the governorates only, but also of all the authorities concerned with these projects and the provision of services in them,” said the president.

He further called on the Minister of Interior to establish permanent police stations in these areas to provide protection and security for their residents, pointing out that development is not limited to construction, but rather to pro- viding all necessary services to the residents of these units.

The Abu Zekry Axis is considered an addition and a huge qualitative leap that will open new development horizons for the entire western region of Alexandria and increase its urban space, and link the port of Dekheila to the desert

road and the international coastal road with the city of Borg Al- Arab, making it a vital artery to connect Alexandria to the new city of Al- Alamein via the coastal road, the spokesperson for the presidency said in a statement.

He added that the reconstruction axis comes as an additional step in the implementation of the state’s strategy in establishing a network of roads and axes throughout the republic to contribute to enhancing economic and commercial returns, provide job opportunities, and link national projects to integrate with each other as a reflection of a comprehensive development vision.