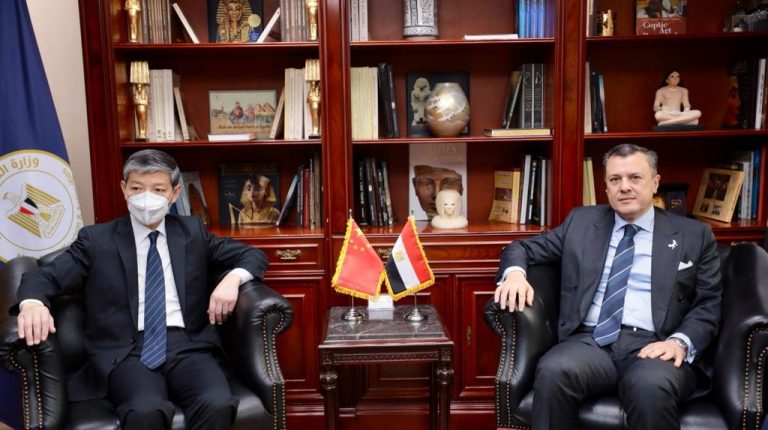 Minister of Tourism and Antiquities Ahmed Issa met with China’s Ambassador in Cairo Liao Liqiang to discuss cooperation between the two sides the fields of tourism and archaeology.

They also discussed mechanisms to push more tourist movement from China to Egypt and investment opportunities in the hospitality industry.

Issa also pointed out the importance of the Chinese market as one of the most important tourist markets for Egypt, referring to a marketing study that was conducted over the previous period that proved the presence of a large number of potential Chinese tourists who wish to visit Egypt who can attract large number of other people.

For his part, Liao praised the efforts made by the Egyptian state to promote the Egyptian tourist destination, especially during the pandemic, pointing to the major promotional activities that it was able to implement during the recent period, including the Pharaohs Golden Parade, the opening of the National Museum of Egyptian Civilization, as well as the reopening of the Avenue of Sphinxes, pointing out that these events had a great resonance in the Chinese market, which is fond of cultural tourism.

He added that there is an increasing demand from Chinese tourists to visit Egypt, as the country possesses distinct and diverse elements that are preferred by the Chinese tourist, especially in the cultural tourism product and the unique museums and archaeological sites that Egypt has an abundance of.

The meeting also discussed investment opportunities in the Egyptian tourism sector, especially in the hospitality industry, where the minister reviewed the most prominent axes of the national strategy for the development of tourism in Egypt and the policies adopted by the ministry to develop its tourism sector in order to increase tourism inflows.

The ministry also doubled the capacity of aircrafts in cooperation with The Ministry of Civil Aviation and has been working to improve the experience of tourists in Egypt and raise the quality of services provided there.

Furthermore, they discussed the proposal to implement various promotional programmes for the Egyptian tourist destination in China through television programmes and various social media platforms, as well as through participation in cultural and national exhibitions and events to introduce the Chinese tourist to the Egyptian products and patterns, especially its ancient civilization.

Additionally, the ambassador presented a number of proposals to enhance means of cooperation between Egypt and China and to further promote the Egyptian tourist destination in China, including Egypt’s participation in cultural and tourism exhibitions to promote the Egyptian tourist destination in China, China holding events in Egypt, and the establishment of a number of joint exhibitions and celebrations whether virtually or in person.