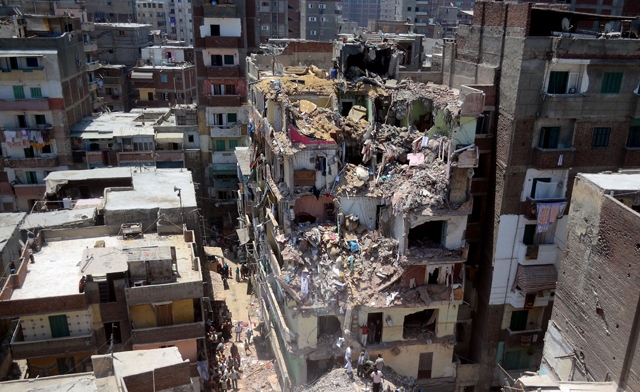 In response to the Minya Al-Qamh building collapse, Sharqeya Governor Khaled Saeed suspended four officials for three months on Tuesday. He also referred them to the general prosecution for investigations for failing to supervise illegal buildings in the city of Minya El-Qamh.

The four officials included the deputy head of Minya El-Qamh, the city’s two heads of the Engineering Administration, and the head of the Coordination Administration.

Saeed and Minister of Local Development Ahmed Zaki Badr visited the Engineering Administration in Minya Al-Qamh and inspected the files for buildings. They ordered seizing other files in the governor’s office until the completion of investigations and to prevent any manipulation of the files.

The two officials further visited the site of the collapsed building to follow up on the situation there and to meet with the residents of the area.

The building collapsed on Monday in Minya Al-Qamh in the Delta governorate of Sharqeya, leaving three people killed, including a child and a 17-year-old, and five people injured. Rescue teams’ efforts are ongoing to search for more people caught under the rubble since there are seven people who are still missing.

Media sources reported that the building collapsed due to drilling next to it to establish another building. This reportedly compromised the foundation of the building, causing it to collapse.

“Buildings collapsing in Egypt have increased in recent years due to the local corruption in the country,” urban activist Atef Amin told Daily News Egypt. “We have never heard about the sacking of a neighbourhood head because of a building collapse; instead it is always the lower-ranking employees who are punished.”

Amin recommended that the president take action against this corruption. “People are dying and losing their homes every day,” he said. and further questioned how it was possible for a contractor to undertake the drilling without permission from the executive authorities.

He concluded that Egypt must take better measures to supervise illegal building, to punish senior officials, and to provide search and rescue companies with more advanced equipment and qualifications.

In November 2015, a five-storey building and a four-storey building collapsed in the Al-Sufi district in the governorate of Fayoum when a bulldozer dug between them. The collapse left nine people dead and injured 25 others.

In the wake of the 25 January Revolution, the turbulent security situation allowed many land owners to build unofficially without permission in slums and on agricultural lands, in violatation of the law. Alexandria is among the top cities with illegal buildings, with 14,521 buildings without licences, according to official reports.