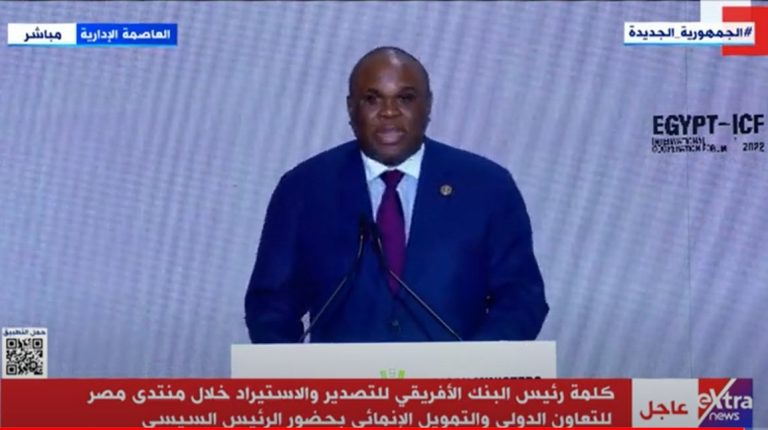 Orama made his statements during his speech at the second edition of the Egypt-International Cooperation Forum (Egypt-ICF) 2022, which kicked off on Wednesday at the New Administrative Capital.

He noted that AfCFTA adjustment facility requires funding worth $8-10 billion, which will enable countries to adjust and offset significant tariff revenue losses as a result of the implementation of the continental free trade agreement.

“Let us all commit to putting this program in place in order to balance the requirements of climate mitigation and the needs of our people,” he added.

AfCFTA can reduce up to 80% of carbon emissions

Oramah stated that the regional value chains that AfCFTA promises to promote can reduce up to 80% of carbon emissions, which are due to the shipping of raw materials from Africa to the rest of the world.

He expressed his aspiration for the AfCFTA to be given more attention and support at COP27, and to be seen as a priority for Africa’s development.

The AfCFTA agreement resulted in the largest free-trade area in terms of the participating countries since the formation of the World Trade Organisation (WTO), as it unites the 55-member countries of the AU in tariff-free trade.

AfCFTA countries have a cumulative GDP of $2.5tn and a market of 1.2 billion people. The AfCFTA free-trade area, which includes an easing of travel across the continent, is hoped to encourage Africa’s trade to diversify away from its traditional commodity exports outside of the continent, the volatile prices of which have hurt the economies of many countries.

“With only a few months ahead of COP27, it is pertinent to revisit our collective goals on mitigation, adaptation, resilience, and finance, and ensure that while climate action is a universal issue, the way in which we address it must be regionally owned and internationally supported, so that Africa may continue charting its way forward,” he said.

“To put things in context, the most significant area in which Africa can effect change in reducing carbon emissions is by offsetting wasteful journeys across our oceans. Africa is the world’s biggest store of minerals and commodities – everything from copper and iron to cotton, cocoa, and coffee. Most of these commodities and minerals are shipped halfway around the world to Asia for manufacturing and processing, before being transported yet again to the marketplace,” he noted.

“This is a key reason why shipping is the single biggest CO2 emitter after China, the US, India, Russia, and Japan at 3.1 percent of global greenhouse gas emissions – equivalent to all African nations combined,” he concluded.

This year’s Egypt-ICF and the Meeting of African Ministers of Economy, Finance and Environment, provides a platform for governments, multilateral and bilateral development partners, philanthropic foundations, private sector, think tanks, and civil society to consider the challenges the continent is offset by and explore avenues to overcome them.

The Forum’s overall objectives include: mobilization of, and acess to finance, to mobilize financing and catalyze private sector investments, focused on developing countries and Africa; financing climate action, adaptation and mitigation to leverage the necessary public and private support to accelerate climate action; and providing a timely platform to explore needed national actions that would help progress towards a just and green transition.

Egypt-ICF 2022 witnessed high-level international participation including Amina J. Mohammed, deputy secretary-general of the UN and chair of the United Nations Sustainable Development Group; John Kerry, US climate envoy; Mark Carney, UN special envoy on climate action and finance; Odile Renaud Basso, president of the European Bank for Reconstruction and Development; Benedict Okey Oramah, president and chairman of the board of directors at the African Export-Import Bank; and Mathias Cormann, secretary-general of the Organisation for Economic Co-operation and Development.